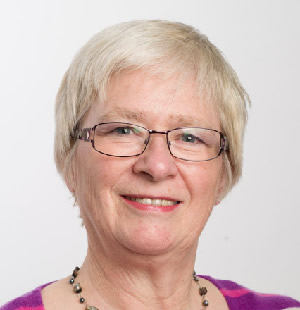 I just decided at 8 years old that this was what I wanted to do – assuming I passed my 11-plus. If not, I decided I would be a policewoman!

My mother told me that I did ask if “dentists earn lots of money” before announcing my decision – sadly she didn’t tell the whole truth as life and the career has worked out!

Why I made that decision? I have no idea. I was a very reluctant tooth-brusher, and had lots of fillings in deciduous and permanent teeth. Luckily I had a kind dentist who used LA from an early age (unusual in those days), so although I disliked the treatment – mainly the cord-driven drill with its terrible vibrations – I was never really hurt. I never needed an extraction, and I liked Mr Alun Griffiths – I can still picture him now.

I am also still listed as a Local Dental Adviser for Dental Protection, available to assist members requiring support in their professional lives. I am also available on a freelance basis for these purposes.

I also occasionally deliver lectures on Law and Ethics, Record-keeping and similar topics for Dental Protection and independently.

I started my career in Community Dental Services in Cheshire, and then central London. I was promoted to a Senior post after 6 years, then to Assistant Area Dental Officer.

After 10 years I had got as far as I wanted in the CDS, and decided to try my hand at general practice. I spent a year as an Associate; then, having my own clear ideas as to how I could make a preventive philosophy work in my own practice, opened a “cold-squat” in Oxford. Encouraged by success, and fed up with daily commuting, I opened another “cold-squat” in my home village. When this also “took off”, and having the opportunity to become involved in Vocational Training, I sold the Oxford practice.

This gave more time to extend my growing involvement in dental politics. I was LDC Secretary for several years, and was proud to be elected to General Dental Services Committee from LDC Conference. Having been a Vocational Trainer for some years, I was appointed to the National Vocational Training Authority for two terms.

Having sold the second practice after 9 years, I joined the Dental Practice Board as a Dental Reference Officer, including secondment to HM Inspectorate of Prisons as a prison inspector. I was made redundant after 11 years, so took a variety of part-time posts including prison dentist, “out-of-hours” service, and postgraduate dental tutor.

I was privileged to join Dental Protection as a Dento-legal Adviser in 2009, retiring in 2016. This, along with my prison inspector role, were perhaps the most fulfilling of my various roles over the years.

Alongside my “regular” career, I spent 21 years as a Territorial Army Dental Officer. My duties included the provision of dental care and training within my Field Hospital Unit, however the most fulfilling aspects were in learning many other skills as an Army Officer, and meeting people who became lifelong friends. Mobilised to serve in Iraq in 2004, I relished the opportunity to put my skills to use, and to practice my chosen career in an operational military environment.

My most challenging period was quite recently, when my husband became ill, and I had to go back into general practice for a year. Having been non-clinical for 2 years, the local Area Team deemed me unsafe to operate without going through the “Equivalence to Vocational Training” process, despite already having a VT number, and having served on the DVTA, making similar decisions about others’ suitability. As my “equivalence” was obtained, the practice sale went through, and I walked away.

Moral: never give up your Performer number, if at all possible. You never know what life has in store.

I am currently appointed as a Non-Executive Director of Community Dental Services        Community Interest Company. I am still a Local Adviser for Dental Protection. I also serve in a voluntary role on the Independent Monitoring Board for HMP Long Lartin.

I continue to attend BDA meetings, and was delighted to be awarded Life Membership of the Association last year.

Serving as a Dental Officer in Iraq in 2004

Don’t listen to others (usually men) who tell you that “you can’t do something”.

Don’t let yourself get bored or trapped – if you feel you would like to try another path in dentistry, just trust your instincts. However always leave your options open in case something doesn’t work out as you had hoped.

Get involved in dental organisations and politics, as much as you can. Everybody – young or well-experienced – has much to contribute, and you will make good friends for life.

As a Vocational Trainer to 3 young dentists

Supporting an overseas dentist in my husband’s dental practice

Encouraging TA officers in my roles in charge of firstly Junior, and then Senior, Officer Training. Supporting members in difficulty as a Local Dental Adviser for Dental Protection